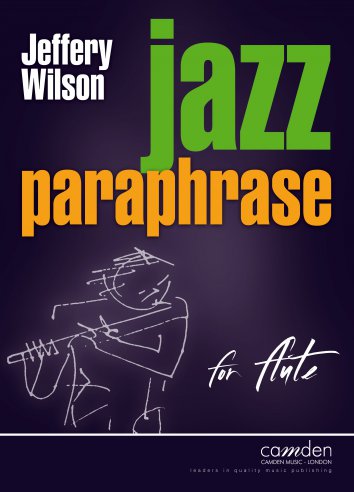 Jazz Paraphrase is a set of engaging pieces/studies which emulate the styles of various famous jazz players.

Noted for his ability to play more than one wind instrument at once, Rahsaan Roland Kirk brought vitality and political insight to the stage. For this writer as a ‘serious minded youth’ Kirk also inspired with an irrepressible sense of fun.

Having an interest in Eastern music before the term ‘World Music’ was coined Yusef Lateef was ahead of his time. His Flute playing raised the status of the instrument in Jazz.

The Puerto Rican Flute player Nestor Torres brings a mix of Caribbean and South American to his improvisations and, I feel, a certain spiritual sincerity to the music.

Equally at home in Classical and Jazz music Hubert Laws is a fluent improviser with a detailed approach to articulation and sound colours in his varied improvisations.

Bob Downes is a British Flute and Sax player who inspired this writer with his contemplative solo flute lines and hypnotic improvisations.

A much travelled Saxophonist and Flautist, James Moody brought the latter instrument to some fine recordings for the Blue Note and Prestige labels. As a player he cultivated a virtuosic fluency in his improvisations.

The angular lines and ‘animalistic’ sounds from this giant of 1960’s jazz music are reflected in this ‘Tukra’ below, dedicated to Eric Dolphy.

Tubby Hayes played Saxophone, Vibes and Flute with equal fluidity and technical conviction. Perhaps one of the finest British Jazz musicians of his generation his life was cut short yet we have some fine recordings to remember him by.

This is included on the following exam syllabuses: