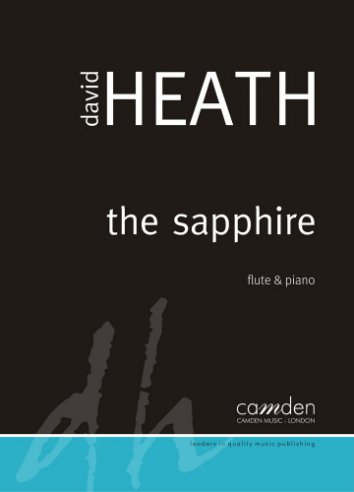 The Sapphire for Flute and Piano

"The Sapphire" is dedicated to Heath's daughter Naima Sapphire. On the day she was born in 2000 Heath was walking over the meadows in Edinburgh to see her, and could hear bagpipes playing in the distance. That inspired him to write this piece.

The melody and over-all style are influenced by Scottish traditional music, however the harmonies come from modern jazz.

David Heath’s inspiration for The Sapphire was drawn from hearing distant bagpipes in Edinburgh on the day his daughter, Naima Sapphire, was born. Heath’s inspiration is evident; the flute line plays an attractive melody influenced by Scottish folk song. Long phrases and beautiful lyricism dominate the music. The piece begins with a drone of an open fifth held on the piano. The flute is left to drift over the top of the drone, allowing the performer to play freely and undisturbed. The piano part gradually becomes thicker and echoes the flute line.
A completely contrasting section is then introduced. The music continues on in the same key, but a jaunty, brisk and more rustic melody full of jumping intervals is presented. The music draws to a peaceful close. The piano harmonies evoke modern jazz instead of a more ‘traditional’ harmony. Heath writes that the tempo and dynamic markings are purely suggestions, thus giving performers the freedom to interpret his music as they wish.
The music is not technically demanding, but provides the player plenty of scope for heartfelt expressive playing. It is suitable for a student grade 6 and above; however, it would also be a fine addition into a recital programme for more advanced players.