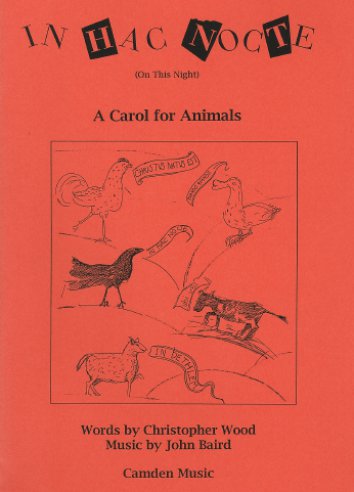 A riotous setting of a poem by Christopher Wood inspired by an Elizabethan wall painting at Shulbrede Priory, West Sussex, which depicts the ancient legend that animals were able to speak on Christmas Day. The picture shows the animals uttering Latin phrases related to the nativity, the words mimicking their natural cries.
Animals played a significant symbolic part in medieval religion. There was a Mass, not unusual in the middle ages and still performed in some rural areas of Brittany and Gascony, in which the choristers took the parts of various animals and birds. In the ancient mystery play of the “Feast of the Ass”, during the celebration of Mass, certain parts of the service were followed by a chorus of
Hi¬-haw, Hi-haw in imitation of the braying of an ass. At the conclusion of the ceremony, the celebrant, instead of repeating the accustomed formula of “Ite Missa Est”, would solemnly say Hi-haw three times!